Bridget Riley at the National Gallery

By Neil Dodgson
In Art
With 0 Comments 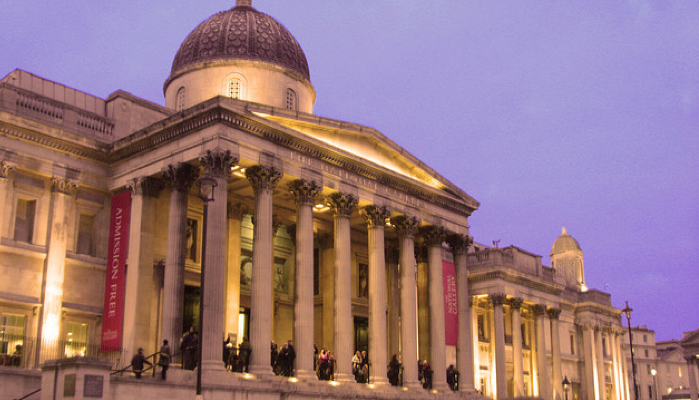 British artist Bridget Riley is best known for her 1960s ‘op-art’ paintings: black and white patterns that appear to shimmer and twist as they play with the early visual processing system in the human eye. Riley’s later paintings exploit higher cognitive processes: provoking softer visual sensations rather than perceptive shock. An intimate exhibition at London’s National Gallery, running until May, shows how her experimental style is rooted firmly in the Western artistic tradition.

Eleven of Riley’s abstract paintings, spanning her career, are hung alongside Old Masters: Mantegna, Raphael, and Seurat. Riley’s earliest painting in the show is her 1947 copy of van Eyck’s Portrait of a Man (Self-Portrait?) (1433). These combine to remind us that the greatest abstract artists mastered the traditional forms before transcending to new art.

The centrepiece is Arcadia (2007). Huge sweeping curves define areas of pure colour: blue, green, and ochre. The eye dances across the painting, seeking pattern and meaning. It forms hypotheses, seeks confirmation, and then, as the pattern starts to make sense, it dissolves back into chaos. This compositional balance between form and chaos runs throughout Riley’s work. It reflects our tendency to seek out patterns in nature: “I work with nature, although in completely new terms”, she says. Like Mondrian’s exploration of the grid and colour, Riley is seeking a deeper reality.

Having spent time viewing Arcadia, go back to the Old Masters, which Riley chose specifically to illustrate her artistic roots. Mantegna’s The Introduction of the Cult of Cybele at Rome (1505-6) illustrates composition. The human figures in the procession are positioned and posed to give repetition and rhythm to the whole painting. Raphael’s Saint Catherine of Alexandria (circa 1507) illustrates use of colour. A harmony of yellows and blues contrasts with highlights of deep green and red.

Riley’s work is a pure abstraction of these fundamental concepts of composition and colour. She wants her art to have no figurative resonances. Abstract form and structure alone must carry the essence of dynamism. This is hard. Remove the beatific Catherine from Raphael’s painting and you leave only swirls of colour. How do you produce a compelling painting if you restrict yourself to pure form and pure colour?

Go back to Arcadia, which is just pure form and pure colour. If you stand in the right place, you can see both it and four smaller variations. These variations are a glimpse into how Riley addresses this challenge. Look carefully for the differences. Arcadia may represent some sort of abstract optimum composition but Riley has not stopped at that point. Blue (La Réserve) (2010) pushes in a new direction. Riley is now experimenting with rectilinear forms round the edges of the curvilinear composition. Does it work? It is an improvement? Is it another optimum point in the space of abstract compositions?

Other paintings demonstrate another of Riley’s working practices. She deliberately constrains her artistic domain. Quoting Stravinsky, she says: “…my freedom will be so much the greater and more meaningful, the more narrowly I limit my field of action…” In Saraband (1985) she limits herself to abutting centimeter-wide stripes of colour. Composition with Circles 7 (2010) is composed solely of meter-wide black circles. In both cases she is seeking an optimum composition that balances order and chaos, thus optimally stimulating the brain. It is tempting to compare the iterative way she moves toward the final arrangement – testing sequentially the look of varying forms and colours – to the experimental method. But Riley insists she is no scientist. Indeed, an artist has the freedom to explore in ways that a scientist cannot: she is synthesising where a scientist would be analysing.

Also precise is Riley’s choice of colour. She painstakingly mixes paint to create an exact hue and saturation, testing and selecting colours that work well with each other and with the human visual system. Opponent colour theory gives the human visual system two primary colour channels: red-green and yellow-blue. Arcadia, for example, includes mostly green and blue forms, one for each channel, interspersed with ochre, halfway between the two opponent colours. All the shades are muted to the same extent so that they provide balanced stimulation to the visual system. Similar colour relationships can be found in the other paintings on display.

Riley learned about colour and visual effects when she spent two years copying Georges Seurat’s Bridge of Courbevoie (1886–87) in the mid 1960s. Seurat worked with tiny spots of paint in complementary shades to convey emotion in his paintings using a new language of art – pointillism. Three of Seurat’s preparatory studies are on show. If you visit the Exhibition, go afterwards to Room 44, where the large Seurat paintings hang. You will see them in a new light, having seen Riley.

While it would have been nice to have a photo of one of the paintings, they are all copyright and not available for general use.